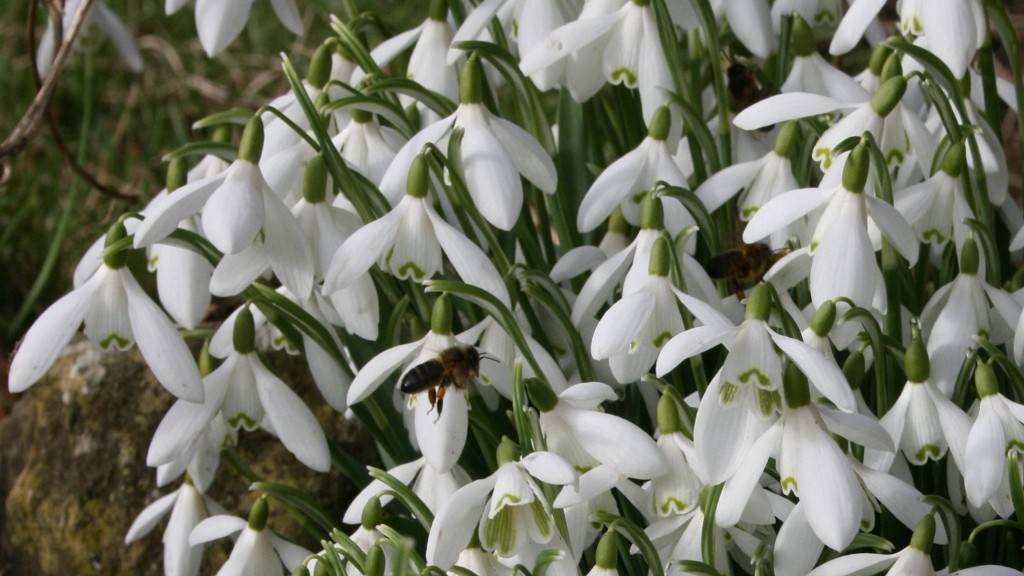 Any warm sunny days in spring the bees will be working the snowdrops so watch out for orange/brown pollen loads – see photo above.

For the bees, this fresh pollen and perhaps a little nectar heralds the beginning of a new year and may help nudge the queen into lay.

From the point of view of the snowdrops – the bees are welcome pollinators. Pollination is the transfer of pollen from the male parts of one flower to the female parts or another flower. Wind pollination is where male flowers or catkins of a plant, hazel for example,  release massive amounts of pollen into the air where it is carried on the wind to the female flowers. Insect pollination is where the same job is carried out by an insect. To attract insects, the flowers of such plants often exude nectar.

That’s the bare bones of it and that might be enough. For the nitty gritty though – read on…

Pollen grains contain male generative material and although it is their destiny to fertilise the ovules of a different plant, perhaps many miles away, they are obviously incapable of independent movement and depend instead on carriage either by insects or by the wind.

Pollen grains are microscopically tiny, they have a tough, highly durable and often richly ornamented coat and contain among other things – two nuclei – a tube nucleus and a generative nucleus. On the ripening of the pollen, the generative nucleus divides into two sperm nuclei and the anther bursts open to release the pollen to the wide world.

Some plants can self-pollinate – that is the ovule is receptive to pollen from the same plant. This is ‘self pollination’ and is generally considered to be a bad plan; it is better if they can be pollinated by pollen from another plant, so there are mechanisms in place to prevent selfing.

One such method is a sort of biochemical repulsion built in to the surface of the stigma which prevents the germination of all unsuitable pollen – a category which may include its own.

The stigma is a sticky pad at the tip of the style designed to catch and hold grains of pollen. If the surface of the stigma is receptive to the pollen grain it will germinate, the tough coat rupturing to allow the growth of the pollen tube down between the cells of the style and guided towards the ovary by a chemical attractant – usually calcium. The growth of the pollen tube is controlled by the tube nucleus and the tube contains the two sperm nuclei. On reaching an unfertilised ovule the tip of the tube penetrates a tiny pore called a micropore and the two sperm nuclei are released into the ovule. One of the sperm nuclei fertilises the egg which goes on to develop into the seed embryo. The other nucleus somehow combines with two other nuclei and goes on to make the seed endosperm – a nutrient-rich ‘fodder’ which nourishes the growing embryo and will eventually fuel the tiny seedling that will eventually burst from a germinating seed.

Anther The part of the stamen producing the pollen grains.

Filament The stalk attaching the anther to the flower.

Carpel Female parts of a flower – stigma, style and ovary.

Nectary Little ducts within the flower, which secrete nectar.

Ovary The ovary is the portion of a flower in which the ovules are contained and mature.

Ovule Structures that contain the female genetic information of what will become the seed of the plant.

Pollen tube A structure which sprouts from a germinated pollen grain to convey the sperm nuclei down the style to the plant ovule.

Stamen Male reproductive organ of a plant consisting of the filament and the anther.

Stigma Receptive surface at tip of style to which pollen attaches and germinates.

Tube nucleus One of the two nuclei in a pollen grain it contains the DNA needed to control the growth of the pollen tube.