So what is a native bee?

A native bee is a bee that has evolved over thousands of years to survive and thrive in a given geographic area. So, for example, the Italian bee – Apis mellifera ligustica is the native Italian bee and it has adapted to the long hot summers and short winters of Italy.

The other 25 sub species of Apis mellifera are each adapted to the specific climatic or vegetational  conditions to be found in areas as different to each other as Greece and Russia or Switzerland and Cyprus.

The native Irish bee – Apis mellifera mellifera is a subspecies of the European honey bee which has evolved over thousands of years to thrive in all that the filthy Irish weather can throw at it. 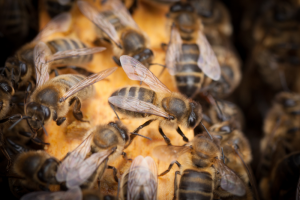 Unfortunately the Irish bee is under threat by imports of bees from other parts of Europe often hybrid Buckfast or Italian bees.

If the importation of bees was halted today, the characteristics of the native bee would allow it to thrive while the imported strains would eventually fizzle out.

The Latin name for the European Honeybee is Apis mellifera; Apis for ‘bee’ and mellifera for ‘honeybearer’. The species occupies an enormous geographical range extending from Scandinavia and the British Isles in the north, southwards across Europe and into Africa and eastwards all the way to the Urals mountain range which forms a boundary between Europe and Asia.

The best bee for any country, or region within that vast range is the local subspecies. If the reasons for that aren’t obvious to you, here they are:

It is nonsensical to introduce other subspecies or propagate hybrids of subspecies – this is a pot that does not need stirring. In addition, foreign species bring with them foreign diseases and foreign pests such as Varroa and we all know where that gets us.

The aim of all beekeepers should be to improve their bees but they must be improved within the subspecies, the variety is already there and crossbreeding bees will always eventually result in cross bees or characteristics which are not heritable in any meaningful way.

Characteristics of the Irish Native Bee

You’d be lucky to spot that last one but keep your eyes peeled.

The final arbiter is wing morphometry and a Cubital Index of 1.6-1.9.