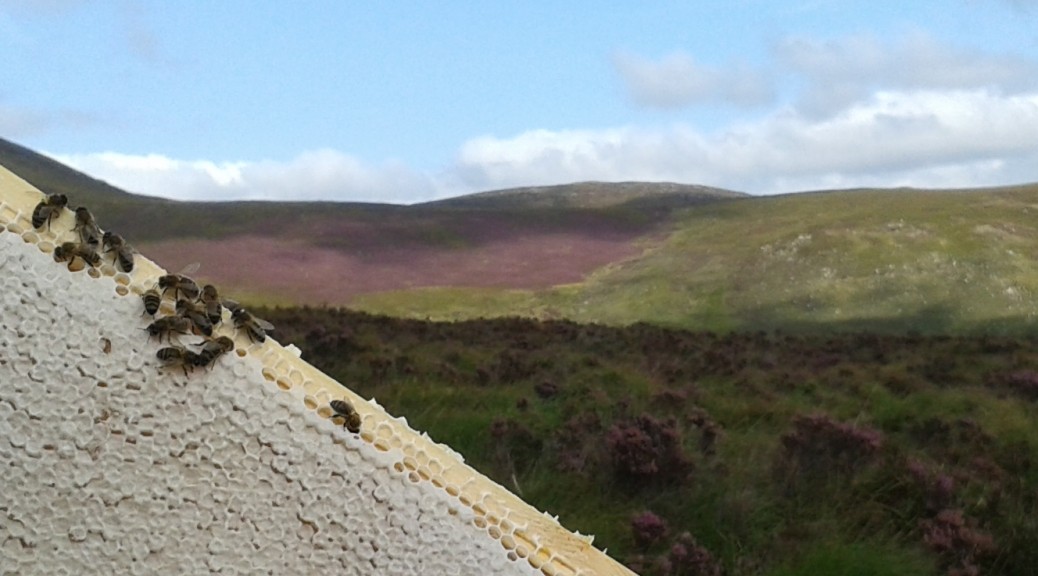 Apart from the weather, the most important element to ensuring a crop of heather honey is the strength of the colony.

To maximise your chances of success – your heather stocks should have:

It can be difficult to find colonies towards the end of the summer with all three attributes but there is a relatively simple all-in-one way to prepare in advance.

Here’s what you do:

During the winter read L.E. Snelgrove’s book: ‘Swarming – Its  Prevention and Control’

Then make yourself some Snelgrove boards. Instructions here:  http://beespoke.info/2015/03/11/make-your-own-snelgrove-board/

As the spring comes in, keep an eye on your stocks and note the strongest, most productive colonies with one-year-old queens. Mark these colonies and have a Snelgrove board for each  one.

Note: you will not be using these queens, you will be asking these strong colonies to requeen and be ripe for the heather later.  But read on…

Once the swarming season commences, look out for your target colonies making queen cells. When the swarm cells have larvae and are well charged, don’t knock any down but prepare yourself to do an artificial swarm about two days before they are due to be capped. If you do this too early, the bees will not be fooled by an artificial swarm and will start the process all over again.

So long as you have the Snelgrove boards ready you can do an artificial swarm vertically.

The flying bees in the top box will leave via the upper right hand door but will return to the parent colony below through the door they have become used to. See Figure 1. and click that if it’s too small.

Bees will now leave through the upper left door and return to the right hand side but will enter by the lower door which leads, through the supers, to the parent colony below. This has the same effect as moving the hive to the other side when you do an artificial swarm the traditional horizontal way – it depletes the upper box of flying bees so it can’t swarm, instead they will choose the best cell and all being well, the virgin will get mated and a new colony will establish in the top box while the old queen will continue developing below. See Figure 2.

Once the new queen has established herself properly and has about 4-5 frames of sealed brood you can swap the two brood boxes (Figure 3. below).  Don’t forget, the two colonies of bees are in contact through the mesh in the centre of the Snelgrove board where they interact with each other throughout, the bees are effectively sharing the same communal stomach and are not strangers to each other.

Both entrances are at the front of the hive.

Bees returning to what used to be the new queen’s colony in the top box will enter through the lower left door to rejoin the new queen, via the supers, who is now in the bottom box.

Here’s what you do when the heather is ready:

If you are using fresh foundation or even sections (!) you shouldn’t need a queen excluder but if you are using pre-drawn supers – leave the excluder in place – an expanse of empty drawn comb might be too tempting for a vigorous young queen.

It is impossible to time this operation so it coincides exactly with the heather as it can  begin to flower any time from the middle of July to the beginning of August but the method seems to work quite well if begun mid-May and is better begun early than late as there is flexibility once the queens have been switched.

There will be drones in your supers so you will need to let them out at some point. Clearing these supers with bee escapes will be problematic as there are sure to be a couple of drones left behind to bung up the works.

2 thoughts on “How to Prepare Bees for the Heather”