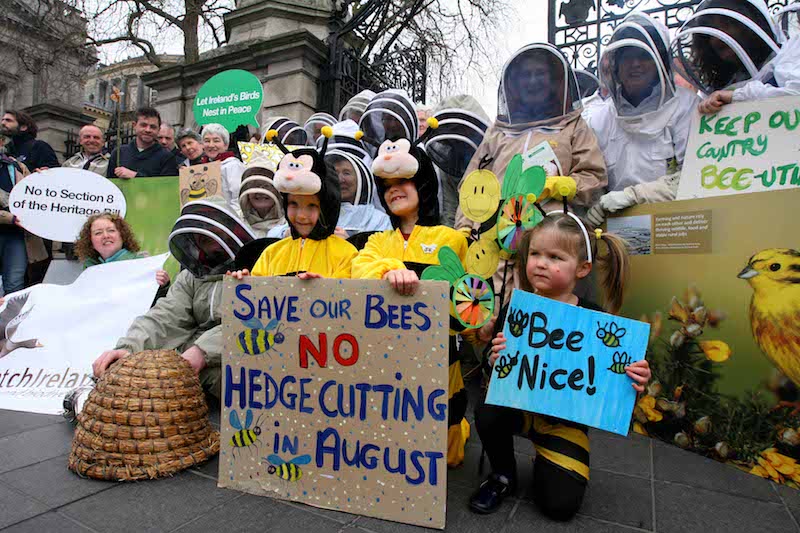 NO REPRO FEE 2.3.2017 Up to 30 members of Beekeepers Ireland wearing beekeeping suits and veils traveled from the four Provinces of Ireland this Thursday swarmed to protest outside Leinster House against the Heritage Bill which is being debated in the Seanad that afternoon. The Bill proposes to permit the cutting of hedgerows from August 1stannually which would have severe negative impacts on Ireland’s wildlife population. Three young children dressed as bees will buzz around the beekeepers. On Thursday 2 March the Heritage Bill will be debated for the third time in Seanad Éireann. Introduced by the Minister for Arts, Heritage, Regional, Rural and Gaeltacht Affairs Heather Humphries last year, the bill proposes to permit the ‘the cutting, burning and removal’ of hedgerows
in August each year and the burning of uplands during the month of March. Existing legislation prohibits hedge-cutting and burning between March 1st and August 31st specifically to protect birdlife, bees, wild pollinators and other wildlife.
Honeybees and other pollinators are entirely reliant on flowers for their food which is pollen and nectar. In many parts of Ireland hedgerows are the only source of flowering plants and habitat. To cut, grub or burn flowering vegetation at any time of the year is to deprive pollinating insects of food. Cutting hedges or verges annually in August would destroy a food source vital to bees as they gather pollen and nectar to store to keep themselves alive over winter. Grubbing and burning flowering vegetation in March would destroy a food source vital to bees as they emerge from winter. PHOTO: Mark Stedman