Louis Edward Snelgrove was a great beekeeper of the 1930’s. He was a Fellow of the Royal Entomological Society,  President of the Somerset Beekeepers Association and also of the British Beekeepers Association.  He wrote 3 books on aspects of beekeeping and queen rearing but the most famous must be ‘Swarming – Its  Prevention and Control’ first published in 1934 and is still in print today – luckily for us. 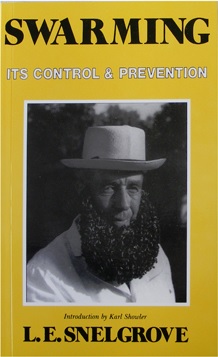 Anyone in doubt about his credentials need only look at the cover of the book to see this is a man who knew how to control his swarms – note the steely gaze and not a bee out of place. Assuming of course that this is a picture of himself!

But apart from that, this is probably the most helpful book on swarming that I ever read and I have no hesitation in recommending it to anyone. While it was written in 1934 before the ravages of Varroa and oilseed rape and may seem a little old fashioned to us ever-so-modern and scientific folks, the bees are as contrary as they ever were. It is not a huge book – only about a hundred pages divided into 7 chapters with an introduction which can be dipped into at will.

How to control swarming without losing our honey crop is the age-old beekeeping conundrum; reading Snelgrove and getting to grips with his ingenious division board is a step along the way to solving it.

He summarises the causes of swarming and methods of prevention which are familiar to most people but his detailed slant on artificial swarming sheds light on why it often seems to fail. What many people fail to appreciate is that an artificial swarm will not work unless the bees are well down the road with the process. Snelgrove suggests that if the bees do not have sealed queen cells, a queen excluder should be placed beneath the brood box until the beekeeper can return, to prevent the old queen leaving with a swarm. Only then will the artificial swarm work – when the cells are capped.

Click the photo below for a close up of Snelgrove boards in action.

There are many such gems in this book but the most important chapters are those which describe his ingenious and adaptable Snelgrove board – a piece of equipment no beekeeper should be without.  For those unfamiliar with it, it is a division board equipped with a central hole covered with wire grille, through which the bees may communicate, and 6 little side-doors arranged around 3 of the 4 sides which are opened and closed sequentially.

It is used to split a colony in a double brood box and operates like a cross between a cuckoo clock and an advent calendar, bleeding bees from one box to the other and thus preventing a swarm. If the timing is right and the weather kind, it will rear a good quality queen into the bargain. Towards the end of the season the new queen is heading up the original strong colony all ready for the heather and the old queen is ticking away in a nuc. At the very least it can be used as a spare floor or to perform an artificial swarm vertically under one roof.

At time of writing – early June – with bees beginning their swarming in all directions I have to say I would hate to be facing into it without my Snelgrove boards. So take my advice – read this book then get yourself a few boards.

Click here for how to make your own Snelgrove board

3 thoughts on “Book Review: ‘Swarming: its Prevention and Control’ by L.E.Snelgrove”

Leave a Reply to B. Cancel reply