On a filthy February day like this, when the rain keeps coming down and you’re harbouring a horrible virus, spring seems a long way away. Summer even further, so lets pretend it’s July, the sun is slanting through the trees and the bees are spiralling out of their hives like little golden bullets – the limes are in bloom, there is work to do and the tree tops are buzzing… 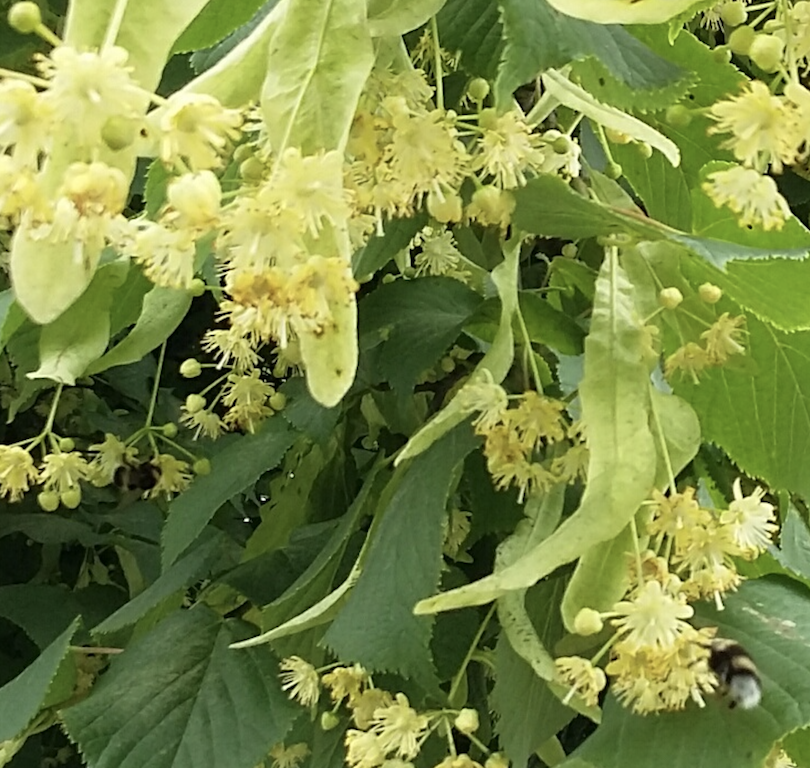 Five species of lime are native to northern Europe but none of these is native to Ireland. Tilia cordata, the small leaf lime is native to Britain and experts agree to differ over the status of T.platyphyllos, the large leaf lime. The limes most commonly seen in Ireland are those forming the magnificent avenues which lead to old demesnes and big houses and this is most likely what brought them here. The lime most often planted for this purpose is the fertile hybrid T. x europaea also known as T. x vulgare or the common lime but all three are now present in Ireland’s parks and gardens or growing wild in woodlands. At one time the lime was a familiar street tree but its large size and the persistent drizzling of honeydew by the aphid population during the summer months has made it less popular in recent, car-driven years.

The limes are known in Europe and America as ‘lindens’ a word which has its roots in old German and Scandinavian languages. In America they are also known as ‘basswoods’ which is a reference to a tough fibrous material called ‘bast’ which is recovered from beneath the bark and used in making brooms and coarse ropes.

Both small leaf and large leaf limes are large long-lived trees generally reaching 30m or more but the hybrid common lime can outgrow them both. That said, in Ireland it is the large leaf lime that holds the record for size (see Table 1.).

All limes have branches that arch quite suddenly downwards with a curiously broken appearance. Twigs are zig-zagged and crimson while the buds are glossy and reddish. Leaves are sharply pointed and heart-shaped; varying between species only in size, degree of feltiness and the colour of the tufts of hair that sprout from the vein axils.

The lower trunks of limes are often fluted, widely flared and bushily obscured by dense masses of side shoots thus:

The limes come into bloom during late June and July, the flowers last from two to three weeks and are pollinated solely by insects. The fragrant, yellowish flowers hang in bunches of four or five beneath an umberella-like bract, which may be an adaptation to keep off the rain. See picture below how the flower stalk stems from the centre of the sheltering bract.

Lime honey is said to be one of the most distinctive with a pleasant minty flavour and a pale greenish gold colour. It can however be tainted by honeydew (fermented oozings of aphids) which can make the honey very dark and give it a sickly flavour. In some seasons, certain species of lime can have a poisonous, narcotic effect on bees, namely T.petiolaris, the weeping silver leaf lime, and T.’Orbicularis’ but these would be relatively rare trees, restricted to park and garden specimens and occasional street trees.

Opinions regarding the degree of usefulness of limes to bees and beekeepers vary. Hooper has a very poor opinion of them, saying he has seen no lime honey since the thirties despite having hives near substantial avenues. Howes on the other hand suspects limes account for a sizeable proportion of the 25% of honey NOT produced from clover; here he is particularly referring to beekeepers who live close to towns. Howes’ book was published in 1945, Hoopers in 1976 so we could be looking at a sign of the times.

Somebody else – I forget who – said a good lime tree was worth an acre of clover.

The best conditions for a lime flow are said to be warm, sultry days and nights with temperatures of around 66-70°F and high humidity. Nectar secretion takes place early in the day and has generally ceased by noon but if the weather is dry and windy it will dry out rather quickly and the bees will miss it. Howes asserts that bumper lime seasons occur every three to four years and seldom fail altogether. He goes on to mention that ’40 average sized lime trees are needed per hive for an increase in hive weight of 4lb daily.’ Can that be right! 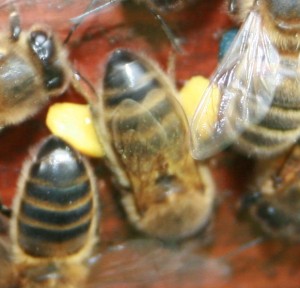 We’ve certainly had several huge crops of lime here.  It tends to flow best in very wet summers and often comes into its own when all else fails.  Which is useful.

Lime timber is white and soft, free from shrinkage and warping when seasoned and with a close, even grain making it suitable for hat blocks, shoe-trees, piano keys and wood carving, including the masterpieces of Grinling Gibbons. It is not durable and consequently is seldom used outdoors.

It is a tree that tolerates lopping and trimming well and when felled will coppice strongly and can be cropped for general use and firewood.

As mentioned earlier, bast from beneath the bark was once harvested to make ropes and brushes and to tie together bundles of coppiced wood or plants. In Russia it was also made into mats.

On the continent, the flowers of small and large leaf lime are dried to make herbal tea or medicinal decoctions thought to be effective in easing the symptoms of cold, flu and indigestion. Other species of lime are not medicinally suitable.