The sycamore is a valuable tree for both bees and beekeepers. Flowering quite early in the season, late April / early May it provides copious quantities of nectar and pollen whenever the weather is good enough to allow the bees to fly. The flowers hang downwards beneath the canopy where they are protected from the rain. Sycamore honey is pale gold with a greenish tinge and pollen loads are a greenish grey. Click photo below for a close-up.

Otherwise, its rude health, profligate rate of reproduction and non-native status mean the sycamore tends to be scorned as a weed tree species and ecological disaster area. Despite this the bees love it, so it is interesting enough for us beekeepers to take a closer look…

The Great Maple, European Sycamore, Seiceamar, Acer pseudoplatanus or just plain sycamore has its origins in the mountains of central / eastern Europe and western Asia. The name ‘sycamore’ is a second-hand one, taken from a tree common in Palestine and known as the fig-mulberry or Ficus sycomorus – from the Greek sykon meaning fig and moron meaning black mulberry. Our sycamore took the name when it was noticed that its leaves were like those of the fig-mulberry in shape.

The sycamore is a hardy, vigorous tree on any type of soil and is also tolerant of high winds, maritime conditions and pollution. Once established, it reproduces all too freely by the annual production of thousands and thousands of winged, wind-borne seeds. These characteristics have facilitated the rapid spread of sycamore throughout much of the rest of Europe and America – to which it was introduced. It is uncertain when the sycamore reached this side of Europe. Some believe it was the Romans who took it to Britain, others argue that it didn’t arrive until the 13th or 14th century when it was probably introduced to Scotland from France. Either way it would have been brought to Ireland shortly afterwards.

It seems that the sycamore was then largely ignored until the late 16th century when it started to become popular – but only in parks and gardens as a specimen or ornamental tree. Later, it fell out of fashion and plantings became more utilitarian, as shelter-belt trees in hill and in coastal areas when, along with their general wind-tolerance, it was realised that exposure to constantly windy conditions causes sycamores to grow broader than they are tall, forming impressive, densely meshed crowns of strong angular branches – ideal for shredding high winds into less damaging zephyrs and wafts.

The pollution tolerance of sycamores makes them a robust street tree but in summer, when they play host to millions of aphids, the dripping of honeydew becomes an irritant to the owners of parked cars and can turn the leaves and underlying pavements black and sticky. The annual production of millions of seeds which turn up in gutters and gardens is a further vexation.

Last year (2014) was a mast year and the Sycamores here in Ireland set vast quantities of seeds, the wings of which were unusually pink (see above – click it – that’s not a trick of the light). Also, it seemed to me that the wings were much longer and broader than usual. That year there were over 30 deaths of horses from eating sycamore seeds and owners were warned not to allow their animals to overgraze pastures where sycamores were present. It was probably due to the huge loads of seeds or you have to wonder if that unusual flamingo pink pigmentation had anything to do with it?

The leaves of the sycamore are a dull dark green in summer, turning drab grey in autumn with no flamboyant autumn colour change in between. 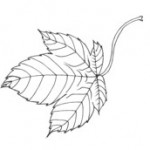 The flowers are quite pretty but insignificant, being mainly green. 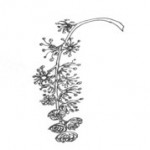 The fruits too are unspectacular except in their number and the astonishing speed with which they turn into trees.

Given the above you may be left wondering why anyone would plant this tree as an ornament but it does have redeeming features:

Sycamore timber is known as ‘sycamore maple’ and may be anything from creamy yellow through to glowing white in colour although in America it is sometimes dyed a soft grey colour when it is known as ‘harewood’. Whatever the colour, it is a lightweight timber, strong and easy to work. The most common uses are in furniture and flooring – especially dance-floors – or it can be turned to make wooden bowls, platters and tableware. It can also be sculpted and was at one time favoured for carving ‘butterprints’ – those little moulds that were once used to shape butter. Sycamore was also used to make rollers for the textile industry as it never stained the cloth.

Sycamore maple is traditionally employed in the manufacture of stringed instruments. Specifically it is used to fashion the sides, back and stock of violins or guitars although the front is always made of slow-grown Norway spruce from the Alps, the reason being that the number of rings per inch governs the timbre of the instrument – the more rings the better the timbre. Some violins show a beautiful dappled grain in the wood of their undersides and this is known as fiddle-back. Fiddle-back or wavy grain sycamore maple is also highly prized in the veneer industry where the tree trunks are stripped of bark then carefully shaved into thin sheets by a machine like a huge pencil sharpener.

Doran,J.J. Sources of Food in Ireland for the Honeybee. In Bees, Hives and Honey – The Beekeepers Companion. Ed. Eddie O’Sullivan. FIBKA. Ireland. 2000.

Sutton,D. Field Guide to the Trees of Britain and Europe. Kingfisher. London. 1990.